Im starting today achievement hunting but when i was younger i remember cheating on some games, i dont know all of them but im trying to relock every game i remember playing and those pointed out by steamhunters bot analysis

Here some of them :

Loadout
Hero Siege
The Walking Dead Season One and Two (i dont remember but if the bot says so)
Saints Row IV
Call Of Duty Black Ops 2 (normal, mp and zombies)
Realm of the Mad God Exalt
PC Gamer
Unreal Development Kit
Grand Theft Auto V (i downloaded a save to jump straight into some mission and then i got a achievement, locked already)
Payday 2 (this one i remember playing until a certain point then i download a save with all unlocked and got the achievements, i relocked all of them just in case)
Bloons TD 6 (this one i got in multiplayer i joined someone on a modded lobby and then he insta won and i got some achievements so i feel i will relock all of them but theres 6 legit achievements that are stat based i cant relock them they keep reappearing)

and thats what i remember, let me know if you see anything that slip past me and thanks for the chance !
Top

Hey Nothurn, thanks for creating an appeal about this. Can you please reopen each of these games to make sure nothing automatically unlocks on startup? If that happens, there may be some save data that needs to be deleted. Either that, or the statistics for the game(s) in SAR/SAM as well. Please let me know how this goes!
100Pals Mod

Fabio wrote: ↑
Sun May 09, 2021 3:52 pm
Hey Nothurn, thanks for creating an appeal about this. Can you please reopen each of these games to make sure nothing automatically unlocks on startup? If that happens, there may be some save data that needs to be deleted. Either that, or the statistics for the game(s) in SAR/SAM as well. Please let me know how this goes!

Hey, thank you, i did all of that but as for bloons td 6 the statistics cant be reset but the only achievements left i earned legit!
Top

In regards to bloons td 6, you may need to delete any relevant save data for it, I believe you can reset the game saves by deleting and redownloading the game, and making sure the cloud save data is turned off.
100Pals Mod

It is deleted.. and the cloud save is disabled as well. But the statistics dont reset
Top

With that not wanting to work properly, we may need to have the game invalidated / remain invalidated on your account, but every other game would still count. Let me talk to the other staff. In the meantime, would this be alright since the game will not properly reset?
100Pals Mod

I'm okay with that but i would want to count since i earned legit those two achievements..
Top 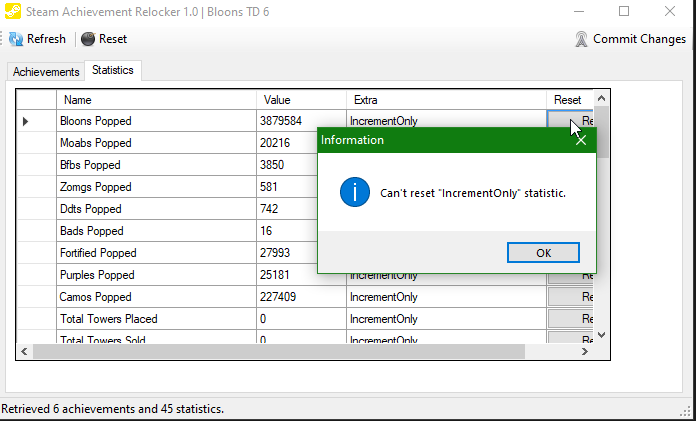 After talking with the other staff, we're thinking bloons should be good since they are very early on achievements, so with that you should be good to go!

Thanks for your patience with the process. If any other issues pop up for you in the future, feel free to ask for help!
100Pals Mod