Also also this wasn't that ''in the past''. I become interested in achievement hunting in early February, because I saw a video from Xeinok.
When I saw that he has over 1mil achievements on Steam, I couldn't believe that they were real. At that time I didn't know he had a discord server and a Steam group and I ignored it. I start unlocking achievements with SAM because that's what I considered to be legit at that time (dumb, I know, I know). I didn't know there are so many sites that can validate your profile to put you in a leaderboard. Now I see that achievements ave a much more importance, not just to have a big number on your profile, but to feel like you achieved something, even if it's about a Visual Novel or Super Meat Boy. That's the 2nd reason why I appealed and I want to play in a fair and clean way
Thanks again !
Top 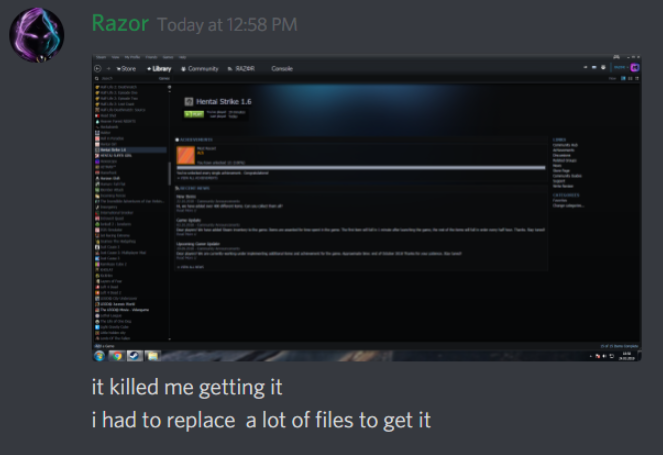 What "file replacement" did you mean here?
Founder of AchievementHunting.com / 100Pals

I just talked about that right now on Discord with Hikikomori and they were depot files, that was allowed, because when I changed the files I was talking with AFAK, and he knew what to do.
But now I just did another oopsie
I dind't read correct the rules on 100pals and I changed some files to get all levels unlocked in Outrunner 2, and now i have all the achievements unlocked. Should I use SAR to relock them or what?
Oh and I want to know if there are any news about my profile, if it's finally verified or not
Thanks !
Top

Yes you should always write down what games/achievements you cheated, and relock them.
Top

Ok well I ''cheated'' from 25 to 60
I will relock them right now and them unlock them naturally.
Thanks !
Top

Alrighty, I've finally gotten to looking through all of your games. Although a fair amount of them are fine, many still don't seem right. When you are able to, please look through the following games and see if you may know what happened, whether it be that you missed relocking it, achievements automatically unlocked on startup, or etc.

- Arcane PreRaise/Arcane Reraise, The Shadow of Hell, and They Came from the Moon are no longer on your account. Did you refund these or remove them from your account?

I believe these are all of the games i noticed. I would suggest going through on your own time as well to check for anything either of us may have missed when we went through them. Some of these games may have save files, or registry/etc files that need to be deleted. Before relocking anything else please respond to the above, and we can figure out what needs to be relocked, what doesn't need to be relocked, and what has files that need deletion.
100Pals Mod

12 is better than 6: Here there are story achievements and achievements based on kills, after I relocked them all, the kills that I did before cheating poped as soon as I got in the game. (I only SAMed 3 or 4 achievements but I didn't remember what they are so I relocked them all just to be sure)
Content Creator Simulator: Same as above, achievements based on the number of views, etc they poped immediate as I got in the game
Crazy Pirate: Same as above
Far Cnight: I had a problem with this one, I couldn't relock them, I tried with SAR and SAM, I think I also forgot about it, I will try to lock them again after I finish this message. Unfornutalety I had the same problem with many games from that list so there is no confusion for these types of game I will type only ''Lock problem''
ReX: Did some progress, then I used SAM to unlock them all. After I relocked and re-entered in the game many of these pop, they are mostly based on the story, I think I had to delete the files before started to 100% it
Teenager vs. Tropical Mutants: Same as above, I needed the help from the Discord people to know what I had to do with this one, u can get the 1st achievement for entering in the game, but since I used SAM to unlock then SAR to relock It didn't pop the 1st time. I had to delete the save files from the Windoes registry to get it and when I entered again they all poped at the same time or somethin'
VCB: Why City: Lock problem
Ambre: I wasn't sure about this one, but if you tell me to relock again I will do, because I want to have my account clean
The Shell of Permafrost: I don't know about this one either but I can remember that I used to SAM to unlock the last achievement
Frightened Bettles: Same as the last one
Restoration: I should checked the date first, now I saw that I unlocked this ones on 29th June 2018 when I can remember that I wasn't an achievement hunter and I didn't have any of the programs that could unlock achievements instantly
The Monster inside me: I am sure that I didn't cheat in this one, it was too easy u just had to click and wait about 5 minutes to unlock them all
Fesnia: No problems here, just wasn't sure about it
Garden of Oblivion: No problems here
Terminal Hacker: I'm 100% sure this is cheated, but here is about the lock problem again about only one 2 achievements, I will try and delete the save files after I'm done with the message
There's poop in my soup: I think here I used Cheat Engine, but I'm not sure about it, I will have to relock for sure
Sky Road: I think it's about Cheat Engine here too
Outrunner 2: I just replaced the save files where all the levels were unlocked, but I already relocked and played it normal, I even asked on 100pals if this was allowed and they said ''no''
Arcane PreRaise/Arcane Reraise, The Shadow of Hell, and They Came from the Moon: I think you can't see them because they were deleted from Steam for some unknown reasons, I still got them by paying on G2A for random Steam keys and I just got them but it's about the Lock problem again. For all of them

I won't do anything until I get another answer because I don't want to do something wrong again.
Thanks for spending your time to help an idiot like me that doesn't know the idea of unlocking achievements !
Top

-12 is better than 6, crazy pirate, and content creator simulator (3 games): these will need to be relocked again and have the save data deleted, mainly from not knowing what it was exactly that was SAMmed beforehand.
-Far Cnight, VCB: Why city, and Terminal hacker (3 games): When you say that there is a lock problem, do you mean that the achievements for the game while in SAR/SAM were protected? As in just not being able to clear/reset all the statistics, or uncheck any achievements? Or do you mean the achievements would automatically unlock right after closing out of the program?
-ReX, and Teenager vs. Tropical Mutant: for these, you should probably do more or less the same thing as with the first three games. I did not group all 5 together because these two seem to have something else that will need to be fixed.
-There's poop in my soup and Sky Road: You were thinking in the right direction with these two, in terms of them needing to be relocked as well. Cheat engine use is one of the other methods that we do not allow to be used.
-Outrunner 2: thanks for explaining that. I thought there was a game you had mentioned doing that in earlier in the chat, but i wasn't sure if this was it.
-Ambre, The Shell of Permafrost, Fesnia, and Frightened Beetles (4 games): if you aren't too sure, it would be best to relock these games to prevent any possible issues from happening in the future.
-Restoration, the monster inside me, and garden of oblivion are fine!
-You missed responding to the Sad Story of Emmeline burn. I'll also come back to those 4 games i am unable to see data for at another time.

For any game that you relock, make sure to start it up again and check for any achievements unlocking on startup. If that happens, there is most likely something that will need to be deleted, whether it be save file or character you can select. Let me know if there are any issues and i'll do my best to help fix that. Go ahead and leave Far Cnight, VCB: Why city, and Terminal hacker alone for now, aside from answering those questions. Once we've managed the other games, we can come back to those.

Also, let me know if you need anything explained better and i'll put it into better words.
100Pals Mod

For Far Cnight VCB: Why City and Terminal Hacker i was talking about the 3rd option
About the Sad Story of Emmeline burn: I'm not sure about this one either so I will have to relock again
I don't need anymore explanation and I will start relocking them as soon as I finish this message !
Thanks again !
Top

I just noticed that i have a problems with 12 is better than 6: I found out where the save files are, deleted them but there is the same problem, multiple achievements unlock at the same time
I don't know what to do so when you are back I hope you can find a solution because i'm out of idea, I've searched for the files for almost 30 mins
Top
Post Reply
30 posts