Not Allowed rule #12: Do not use console commands which directly and instantly unlock achievements.

Years later, I re-locked those 10 achievements because I didn't like what I had done. However, I now realize I should've re-locked all achievements, even the ones I unlocked legitimately. I will do that soon using SAR.


Not Allowed rule #9: Do not alter the system clock in order to unlock achievements that require a passage of time.

I also unlocked "Commitment - Play The Stanley Parable for the entire duration of a Tuesday." on a Friday. I changed my system clock for that one as well, but I think that's technically allowed...


Allowed rule #9: Changing your OS system clock to get Date-Specific achievements is allowed.

I'm aware the developers have provided a command that lets me reset the achievements. I will use it soon.


One last thing, I have unlocked 17 achievements of the Portal 2 campaign at once. It looks fishy, but I can assure you I played that game offline.
Top

Thanks for appealing, staff will review soon
Founder of AchievementHunting.com / 100Pals

For stanley parable, you're correct with being allowed to unlock that achievement on a friday.
100Pals Mod

Hey Fabio, I was under the assumption that relocking the entire game was required for members to clean up their cheating. Perhaps I was wrong?

If it's not required to relock all achievements for partially cheated games, do I also have the option to only relock The Stanley Parable's "Go outside"?
Top

Some instances do require a full relock but its more so a case by case kinda thing. A mixture of cheating depth, your own memory on what was cheated or not, if it can be proven what was or wasn't cheating easily, etc. So with that, zero gear is essentially fine as is since the other 35 were obtained properly.

Regarding the stanley parable, off the top of my head i can't remember if its achievements were funky with resetting them or not. Let me ask the other staff so i can give you an actual answer on the better way to go about relocking that one.
100Pals Mod

I think i was thinking of something else. It should work fine to use SAR to relock the "Go outside" achievement!
100Pals Mod

In paraphrasing what was said, the game's logic for that achievement restarts whenever starting the game back up. With the console command to reset achievements, the game will of course restart that logic because the game was opened. With SAM/SAR/card idlers, games are also effectively opened and the same effect occurs. After relocking the achievement, it should be fine to unlock after the next 5 years.

After you do relock it, go ahead and open it once more just to make sure it doesn't unlock right away.
100Pals Mod

Also, do I need to click "Reset" or "Commit Changes"? 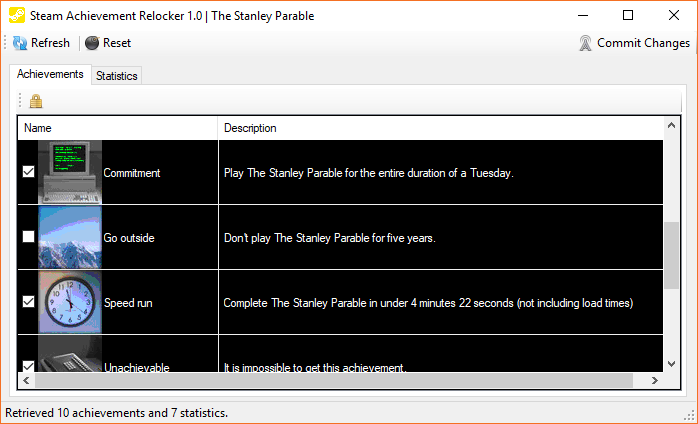 With SAR, you just need to uncheck the achievement you are resetting. The check mark means that you have the achievement unlocked. Once you uncheck Go Outside, all that is left is to press commit changes. Reset would completely reset the achievements.

Do you think it would be wise for use to add in a section in the FAQ on how to use SAR correctly for those who aren't familiar with it?
100Pals Mod